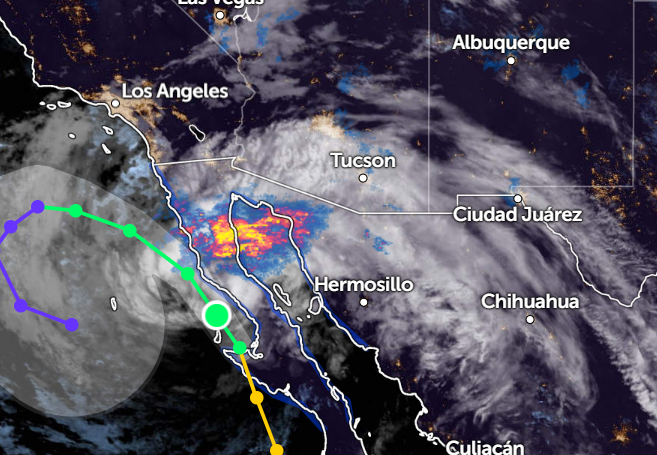 At 8:00 p.m. Kay has been downgraded from Hurricane 1 to Tropical Storm as it gradually weakens.

Kay is seen weakening as it moves north.

The worst part of the storm is on Friday and will weaken on Saturday. The weather reports indicate that it will clear up on Monday.

The AccuWeather website reported that Kay was still a major storm as of Thursday night with 70 mph (110 kph) sustained winds, moving northwest at four mph (22 kph).

In addition, there are likely to be isolated thunderstorms in central Arizona and southern Nevada.

Starting Friday, there will also be minor flooding in southwestern Arizona.

Flood hazards are also possible, as Kay rainfall can amount to one to two inches of rain sweeping through Southern California.

A local news site, CBS Los Angeles, reported that Long Beach was building coastal berms in anticipation of high tides. Bailey Canyon is also advised to avoid due to possible flash flooding in the area. Los Angeles will feel thunderstorms and cloudy clouds.

Tropical warnings were issued in parts of Mexico on Thursday in areas from northern Punta Abreojos to San Jose de Las Palomas.

Tropical storms are still present on the Baja California Peninsula and will continue to spread north.

Advisory explained that strong winds, not directly related to Tropical Storm Kay, are expected over Southern California on Friday.

The Weather Prediction Center warned that high winds could increase the fire hazard in the areas.

Residents are advised to check for updated high wind and flood warnings.

The heavy rain and tropical moisture will help alleviate the hot temperature. The storm will also help with the prolonged drought.