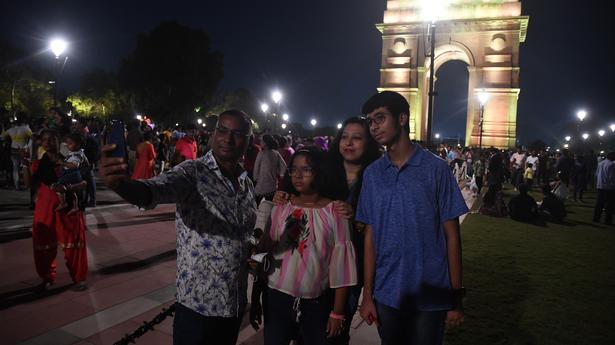 ADVERTISEMENT
In the early 2000s, Freid, a German citizen, visited the 2km stretch from India Gate to Rashtrapati Bhavan and the grassy fields around it.

He has a vague memory of the road, then known as Rajpath, which was “substandard”.

Two decades later, Freid, now in his late 40s, says he is “amazed” at the revamp of Central Vista Avenue.

“It’s so neat! During my last visit the maintenance was not so good. It’s a pleasant surprise to come here after 20 years and witness this makeover,” said Mr. Freid as he checks out the same 2km stretch, which has been given a makeover and renamed Kartavya Path.

He walks around Central Vista, soaking up the atmosphere and recounting his previous visit to a young French citizen who is visiting the newly renovated Central Vista for the first time.

The makeover of this historic site, inaugurated by Prime Minister Narendra Modi, has not only attracted new visitors.

Many former visitors also stopped by this weekend to discover how different their favorite picnic spot looked now.

One of them was 80-year-old Arihant, a regular visitor to the area for five decades. He sat on a granite bench to catch his breath.

Despite having a stroke, Arihant took a walk here to get a glimpse of the space where he had spent his childhood enjoying” bhel puri and chai” during winter.

The center of attraction for many is the recently inaugurated 28-meter tall statue of Netaji Subhas Chandra Bose at India Gate.

While many families admired Netaji’s statue, people could also queue to see the dance and music performances on Sunday evenings, when the four-day cultural extravaganza came to an end here.

Kapil Jain, 55, who has visited the iconic location since childhood, thought the refurbishment was impressive.

His wife, Kaamini, was happy with the number of people coming together for the first time after two years of COVID-19 restrictions.